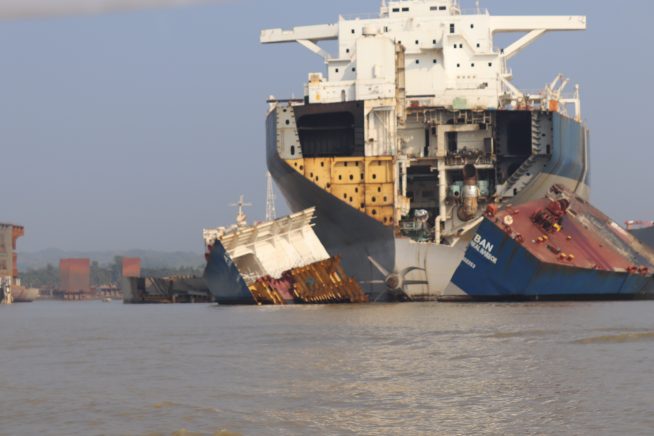 Today, on 3rd december’20, another worker died in one of the infamous ship breaking yards, MA Ship breaking, in Sitakund, Chattagram. The name of the dead worker was Mahfuz (35), who was working in the yard as cutter helper. The accident took place by falling from height as the worker were not having any safety belt with him while he was working inside the ship. The local department of inspection for factories and establishments (DIFE) said, that they will do an inspection in the yard and will take necessary action. This is seventh worker died in this year in different ship breaking yards because of the work place accidents. Muhammed ALi Shahin, Coordinator of YPSA, says that most of the yards are still not up to the mark regarding ensuring the safety measurement in their yards and normally the rate of the accidents is higher in winter so yards should be much more careful during this time of the year. And the concerned government department should be stricter on such yards who don’t practice adequate safety standard in their yards.

One more worker got severely injured in a shipbreaking yard named as Jomuna shipbreaking yard while the worker was working yesterday afternoon, 23rd June 2020. The name of the victim is Abdul Hamid (24) from the district of Kurigram (north bangle). According to the inspector of the Department of Inspection for Factories and Establishments (DIFE), a government body, the worker was hit by a heavy iron piece in the yard and had severe head injury. Later the worker was admitted in the hospital and under the treatment of the neurosurgery department of CMCH (Chittagong medical college hospital). The name of the ship which is being dismantled in the yard is Steller Knight, owned by Polaris shipping from South Korea. (Picture with the news does not represent the yard)

More information on accidents in the yards:

Two shipyard workers died after being exposed to toxic gas while dismantling an old ship at Sitakunda upazila of Chattogram this afternoon. The incident happened around 12:30pm, on 24th march 2020, at the shipyard of Khawaja Steel, a sister concern of KSRM, reported by Sitakunda Police Station. The deceased were identified as Niranjan Das, 30, and Suman Das, 35, both from Jhalakathi. The workers were drilling holes on the back of the ship in order to remove toxic gas which had formed inside.

On 4th February, 2020, one worker, Kiron Tripura, died in Ziri subeder ship breaking yard while the victim was hit by an iron plate in the yard.

After analyzing yard accidents over the years, it has been found that workers mostly die from explosions or after coming into contact with toxic materials from ships.

Accidents, including inhaling dangerous substances like carbon monoxide or falling from dizzying heights with no safety harness, are major causes of workplace injuries in the ship-breaking industry.

Other causes of workplace casualties include workers getting crushed by falling steel beams and heavy plates, as well as cylinder, boiler, and generator explosions and electrical shocks.

Strict enforcement of law is must

Muhammad Ali Shahin, senior program coordinator of YPSA, kept emphasizing the fact that the rising workplace casualties would jeopardize the image of ship-breaking yards at home and abroad. YPSA’s demand is zero accident and zero death in the ship breaking yards.

“The alarming rise in accidents points to the poor occupational safety standards at ship-breaking yards. The ship-yards must emerge as green ship-yards and an action plan involving all the stakeholders is a must to strictly enforce the laws here,” Shahin said, who has been working in the ship-breaking sector for almost 18 years.

According to the International Labour Organization (ILO), ship-breaking has become a major occupational and environmental health problem in the world.

It is amongst the most dangerous of occupations, with unacceptably high levels of fatalities, injuries, and work-related diseases.

Ship-breaking is a difficult process due to the structural complexity of ships, and generates many environmental, safety, and health hazards.

It is done largely by the private sector and is rarely subject to safety controls or inspection.